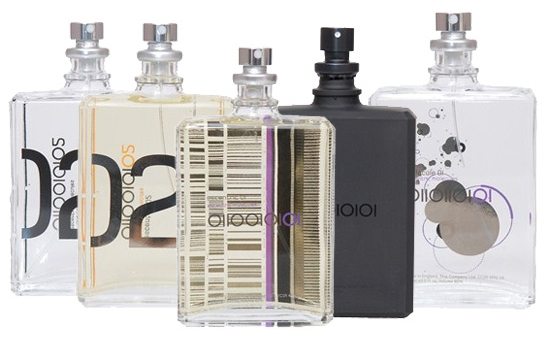 Exclusive fragrances available at the Spa

The Escentric Molecules line, previously only available in select London boutiques is now available at The Spa at Bedford Lodge Hotel. The line is unisex and contains 6 pairs of scents ranging from fruity to musky. Visit the spa for a complimentary fragrance consultation and experience this unique fragrance journey.

Beautiful Minds volume 1 has been dubbed Intelligence and Fantasy while Volume 2 is known as Precision and Grace. Again, universal in their appeal to men and women the new Beautiful Mind series looks set to cause yet another stir in the fragrance world.

Escentric Molecules was launched as a range of perfumes in 2006

Geza Schoen, a Berlin-based perfumer with a long track record in the fragrance industry, wanted to make a deliberately provocative comment on the way fragrance is made and marketed today. He was keen to de-mystify the whole process.

So his proposal was this: the simultaneous launch of two scents, one a heady synthesis of different ingredients (which is how most people would understand the concept of fragrance), now known as the Escentric range and the other, an homage to the single note – the aroma-molecule – now part of the Molecule range.

The complex-sounding idea was in fact simple in practice, as indeed all the best ideas are. The aroma-molecule on which the original pair of fragrances was based was Iso E Super. And this single aroma chemical is now known as Molecule 01, with absolutely no other blended ingredients in it.

The Iso E Super molecule has the affect of tickling our vomeral gland which is where our pheromones are detected so is consequently able to create your own personal fragrance, that you don’t detect but others most certainly do as you waft past them. This does of course make the Molecule 01 fragrance universal appealing to both men and women, again another concept followed through the whole fragrance line.

This does of course mean you and your partner could both wear Molecule 01 and it would create a different fragrance on both of you. Molecule 01 is priced at £72.00 for 100ml, but can also be purchased in the 30 ml size at £46.00.

The more conventional version of this fragrance which can be smelt by the wearer is Escentric 01 which contains the Iso E Super in an unprecedented concentration (65 per cent) together with other ingredients, including pink pepper, lime-peel and orris incense to create a slightly stronger more heady aroma which appeals to both men and women alike.

To develop his two exciting new fragrances Schoen turned to two like-minded spirits in London. He had already worked with Jeff Lounds of This Company on several special fragrance projects, including a visionary branding exercise for Bombay Sapphire gin, which was just slightly ahead of its time. And the award-winning Me Company had already created pioneering graphic work for everything from Bjork’s album sleeves to Lancome’s advertising campaigns.

With the packaging for Escentric Molecules, Me Company was able to offer fascinating visual analogies for the elusive nature of the products themselves.

This same team – creative, business, design – has gone on to work on two more fragrance duos.

Escentric 02 and Molecule 02 launched in April 2008. They were based on ambroxan, an aroma-molecule nature-identical to the key ingredient in ambergris, a substance which has been used in perfumery for thousands of years. The 02 range is fresher which dries down to a warm sexy under note.

The Escentric 03 and Molecule 03 followed in September 2010. This time, the foundation was the aroma-molecule vetiveryle acetate, a refined vetiver note, with ginger, lime, sandalwood, leather and musk added to the Escentric 03 version.

In essence the range centres around the initial concept of creating a personalised fragrance with the Molecule range while also identifying the market that desires a stronger noticeable scent on themselves, which the Escentric versions cater for.

One thing Schoen wanted to do when he created Escentric Molecules was to bring the focus back to the substance of perfumery in an industry which often puts more emphasis on the style. The irony is, of course, that in setting out to dispel myth, Escentric Molecules has actually created a whole new mystique for itself.

Another irony is that, despite Schoen’s distaste for the celebrity fragrance world, he has made something that has attracted an ardent, under-the-radar celebrity following. It would be revelatory to one day collect all the testimonials that have attached themselves to Escentric over the years.

The secret of its success is ultimately this: the relationship between each of the paired fragrances creates an effect that is intangible, tantalising, sensual and – most important – as individual as anyone could want their fragrance to be in an age of big designer-branded homogeneity. As one devotee said to Schoen and Lounds: “This isn’t your fragrance, this is my fragrance.”

Interested in making an enquiry? Get in touch and one of our team will talk you through the details.

Get in Touch Now